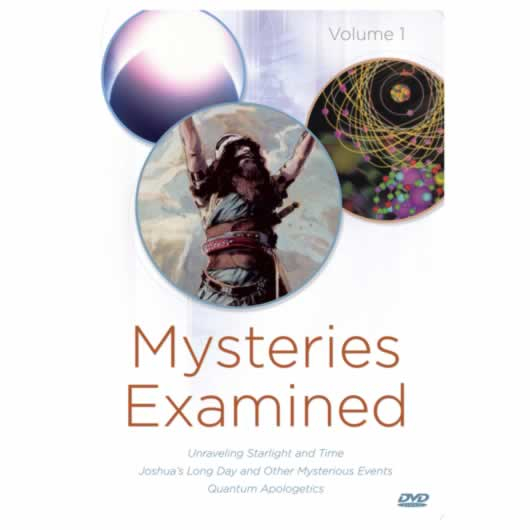 Unraveling Starlight and Time: Scientists say that heavenly bodies are billions of light-years away. This has caused some Christians to wonder whether there is conflict about the fact that light has been traveling to Earth for millions, even billions, of years if the Bible teaches that the Earth is only a few thousand years old. Astronomer Dr. Hugh Ross and theologian Kenneth Samples, discuss a number of hypotheses that have been proposed by creationists to reconcile this apparent conflict between science and Scripture. Did God create the universe to "appear" to be old by creating light already "on its way"? Or did light travel faster in the past than it does today? Dr. Ross also includes some discussion of Dr. Russell Humphreys's cosmological model.


Joshua's Long Day and Other Mysteries
: For centuries, two Scripture passages have puzzled believers and served as "proof" for skeptics that the Bible contains myth and legend: Joshua's long day and Hezekiah's backward-moving sundial. Astronomer Dr. Hugh Ross evaluates the plausibility of various hypotheses explaining these mysterious events. He also examines several supposed proofs for the accuracy of the Bible, including claims of a modern Jonah, a hole in the sky through which the New Jerusalem is supposed to descend, the search for the ark of the covenant and Noah's ark, a hole through which can be heard the screams of people in hell, the gospel written in the stars, and numerology in Scripture. Dr. Ross also discusses seven reasons why astrology is not a science.


Quantum Apologetics: Research in quantum mechanics has led some scientists to speculate the the universe created itself. Dr. Hugh Ross, along with two experts in the field, underscore the fact that the more people learn about quantum mechanics, the more evidence they uncover for the activity of a divine Creator.

PLEASE NOTE: This series of classic episodes of the Reasons to Believe television program originally aired on the Trinity Broadcasting Network. Due to the age of the original recording a small portion of this DVD has minor tracking issues during a 5-minute segment.